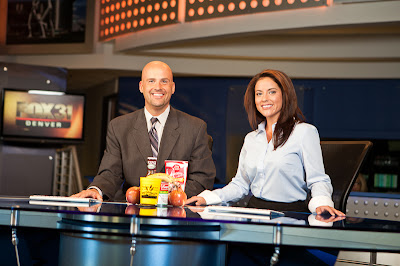 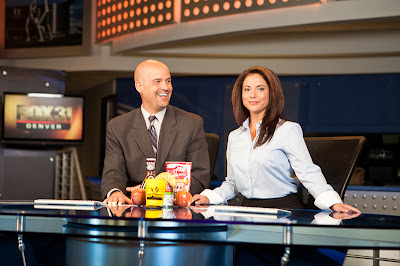 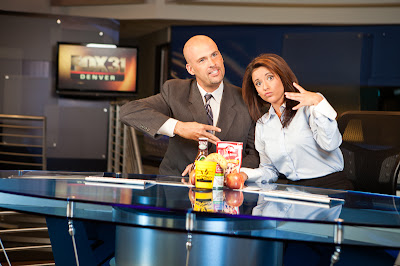 Melody Mendez & Ken Clark, FOX 31 Morning Show Anchor & Traffic Anchor
Photo by Hans Rosemond
“As a Denver native I have seen the growth the city has gone through.  Throughout the years one thing has remained the same; the big hearts of the people who call Colorado home. Times are very tough and families need basics like food.  Joining the team at Food Bank of the Rockies and helping fill the basic food needs of local families is an honor.”  Ken Clark
About Melody:
Melody Mendez is the co-anchor of FOX31’s Good Day Colorado. She joined the KDVR team in August 2010. Her love of storytelling and constant learning makes journalism the perfect career for Melody. She cherishes every opportunity to meet new people and share their stories.
Before coming to Denver, Melody was a reporter/fill-in anchor for KOMO 4 News in Seattle, WA. While there, she was fortunate to witness the community band together after the slaying of four police officers in a Lakewood coffee shop, and covered the hunt for their killer. She often filed reports for their Spanish-speaking station, KUNS ( Univision). Melody loved her time in the Pacific Northwest – but is ready for the sunny days in Denver.
Melody is a graduate of Boston University’s College of Communication, where she received the “Dennis Kauff Award” for excellence in journalism. After graduation, Melody headed south and began her broadcast career at WBBJ in Jackson, Tennessee. Her work as the evening anchor, reporter and Gibson County Bureau Chief helped launch the station to its spot as the highest rated ABC affiliate in the nation. During Hurricane Katrina, Melody led a major effort to get water to victims on the gulf coast. With her help, six tractor trailers full of bottled water were sent to those in need.
After 2 years in Tennessee, Melody was hired by WICD TV in Champaign, Illinois. She quickly worked her way up from General Assignment Reporter to Weekend Anchor. While there, she worked closely with the American Cancer Society and helped organize the Champaign County Relay for Life.
The daughter of an Air Force Pilot (and Air Force Academy grad), Melody has travelled the globe. Her job has brought her to small towns and cities across America. She is thrilled about her latest stop here in Denver and can’t wait to be a part of the community.  A native New Englander, Melody loves sports and remains a loyal Red Sox, Patriots, Celtics and Bruins fan – no matter where she lives! When her Boston teams aren’t in town, she looks forward to cheering on the Rockies at Coors Field and catching a Broncos game at Invesco.  In her free time, Melody likes to travel, exercise, read, spend time on the water and visit family in Peru.
Melody is a member of the National Association of Hispanic Journalists.
About Ken:
Ken Clark is traffic anchor on KDVR FOX 31’s Good Day Colorado.  He worked as traffic reporter for Good Day before becoming an anchor on the show. Prior to joining Fox-31 Ken worked at Premier Traffic. He was the airborne drive time reporter for 107.5 KQKS and 104.3 KJCD.  Ken’s career also includes working as an overnight jock for 103.5 KRFX. He also produced “Lou from Littleton” at 850 KOA and “The Peter Boyles Show” at 630 KHOW.

Ken began his career as operation manager at 91.9/ 93.9 KDUR in Durango, CO. He received Bachelor of Arts in Psychology from Fort Lewis College.