We are SO grateful to be partnered with the generous folks at CoBank.  Check out what they’re doing to fight hunger on a national level!  Special thanks to our Board of Director Chair, Amy Diaz of CoBank, for her involvement in our mission of fighting hunger and feeding hope.

Feeding America, the nation’s leading anti-hunger organization made up of over 200 food banks nationwide, is pleased to announce a $1,000,000 donation from CoBank, one of the nation’s largest agribusiness lenders. The money will go to help food banks deal with the pending high food prices as a result of this summer’s drought and help bring food to those in need in already devastated areas.

The CoBank funds will be distributed directly to food banks in areas where the bank and its affiliated Farm Credit associations have operations including rural communities. Rural communities are among the hardest hit when it comes to food insecurity. According to the US Department of Agriculture 15.4% of the food insecure households are in rural areas.  And for many of those residents, having access to affordable food can be difficult.

“For many people, any increase in the cost of food can have a devastating effect on the family budget,” said Matt Knott, interim President and CEO of Feeding America. “And that’s the same for many of our food banks – any increase in food prices can result in increased food costs for our food banks that could result in budgets being stretched.”
The donation from CoBank will help improve the ability of the selected food banks to expand access to food for children, families and seniors in the communities that they serve.

“One of the unfortunate side effects of the drought has been a growing concern over increasing prices for a variety of food products at a time when unemployment remains stubbornly high,” said Robert B. Engel, CoBank’s president and chief executive officer. “We want to do our part to alleviate the downside effects of a weak economic recovery coupled with potentially higher food prices, particularly on the poor. We’re pleased to be able to underwrite Feeding America with this contribution and support their work on behalf of needy people across the country.”

The donation by CoBank is especially critical following the release of new food insecurity numbers released recently by the US Department of Agriculture that found 14.9 percent of Americans – or 1 in 6 – lives in a household that is at risk of hunger. Nationally, that’s 50 million people, including nearly 17 million children.

CoBank is a $90 billion cooperative bank serving vital industries across rural America. The bank provides loans, leases, export financing and other financial services to agribusinesses and rural power, water and communications providers in all 50 states. The bank also provides wholesale loans and other financial services to affiliated Farm Credit associations serving more than 70,000 farmers, ranchers and other rural borrowers in 23 states around the country. CoBank is a member of the Farm Credit System, a nationwide network of banks and retail lending associations chartered to support the borrowing needs of U.S. agriculture and the nation’s rural economy. 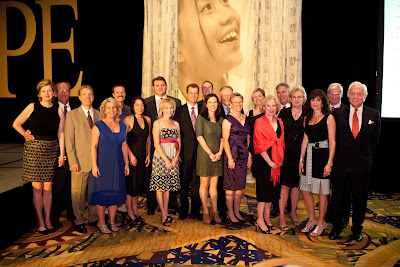 Our friends at CoBank have signed on as one of our presenting sponsors at the Joe and Debbie Sakic Bringing Hope to the Table Celebration for the past 3 years and have agreed to commit to this sponsorship level through 2015!  Pictured above is the CoBank team at last year’s Sakic event.