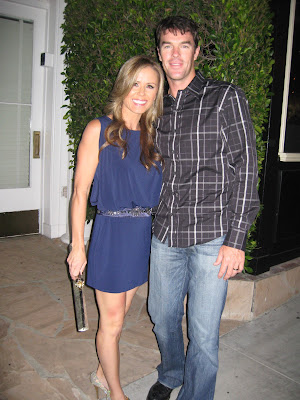 Trista & Ryan Sutter, Stars of ABC’s The Bachelor
“When we were approached to be involved with Food Bank of the Rockies, we didn’t hesitate. As parents, we want to teach our children to give back and thought this would be a perfect way of showing them to do so, through example.”

About Trista:
Now a Vail, Colorado resident with her husband Ryan, Trista Sutter (formerly Rehn), was born in Indianapolis, Indiana and raised in St. Louis, Missouri. After receiving a Bachelor Degree in Exercise Science from Indiana University, she went on to earn a Master of Science in Physical Therapy from the University of Miami. She enjoyed Miami so much that she ended up calling it home for five more years, with four being spent practicing pediatric physical therapy at Miami Children’s Hospital, and two as a Miami Heat dancer.

Looking for something new and exciting, Trista applied for a new show called “The Bachelor”. After being chosen to appear as one of 25 bachelorettes on the ABC hit, she achieved overnight fame as the runner-up who was not ultimately picked as The Bachelor’s dream girl. Not being chosen proved to be the best thing that ever happened to her, because she was then asked to become the first Bachelorette. On this spin-off, she not only met the man of her dreams in handsome firefighter Ryan Sutter, but said “yes” to his televised marriage proposal that 26 million people tuned in to witness. After a long engagement they planned a dream wedding with the industry’s best for a special TV wedding that they shared with the millions that had watched their love story unfold. Until recently, they were the only couple from “The Bachelor” and “The Bachelorette” to actually tie the knot, and one of few to even remain together. As icing on the proverbial cake, they welcomed a beautiful baby boy, Maxwell Alston Sutter, into the world on July 26, 2007 after 2 long years of trying, then were doubly blessed with a precious baby girl, Blakesley Grace Sutter, on April 3, 2009.

In addition to her involvement on the Bachelor and the Bachelorette, Trista is also known for her participation on the first season of the Emmy-nominated, “Dancing with the Stars”; blogging for E! Online and Buzz.com; hosting roles including Good Day Live, The View, Miss America, VH1’s All Access, and “Trista and Ryan’s Honeymoon Hotspots” on the Travel Channel; appearances on The Oprah Winfrey Show, The Rachael Ray Show, Fear Factor, Ellen, The Tonight Show, Howard Stern, According to Jim, and Less than Perfect; a column in Redbook entitled “My Life as a New Wife”; a diaper bag line called “Trista Baby” and multiple features in People Magazine, Maxim, MOM magazine, In Style, Good Housekeeping, TV Guide, In Touch, Life & Style weekly, and US Weekly. She is currently a stay-at-home-and-work mom who is now a designer for a successful direct sales company called, Vintage Couture.

Interests: Skiing/Snowboarding – “Shane would do it.” Mountain Biking – “Deep within is the grit, guts and determination to move mountains.” Triathlon – “Anything is Possible.” Mountaineering – “Only those who will risk going too far can possibly find out how far they can go.” Environment – “I sing of her glory because I live by her grace.”