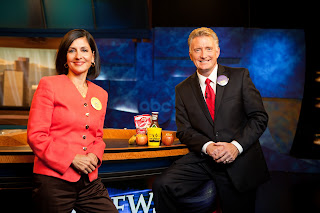 Anne Trujillo & Mike Nelson, Nightly Anchor & Chief Meteorologist for 7NEWS
Photo by Hans Rosemond
“This is a tough time for so many families in Colorado.  The mission of Food Bank of the Rockies has never been so important.  We urge everyone to do what they can to help support this vital service.”

About Anne:
Anne Trujillo co-anchors 7NEWS at 3, 5, and 10 p.m. Anne started her broadcasting career at a Denver radio station. From there, Anne moved on to television stations in Scottsbluff and Omaha, Neb., before returning home to Colorado in September 1984 as a 7NEWS general assignment reporter.

Throughout her career, Anne has been very active in the community. She currently serves on the Advisory Board for the Kempe Center, and is chair of the Advisory Council for Escuela de Guadalupe, a K-5 school in Denver. She is also a member of the Latino Outreach Committee of the Denver Art Museum and the Food Bank of the Rockies Celebrity Council.

In addition, Anne serves on the board of “WINS,” Women’s Initiative for Networking and Success, a McGraw-Hill Companies initiative to provide skills for advancement to women within the company.

Anne has also received numerous awards for service to the community from Mi Casa Resource Center, RAAP, Rape Assistance and Awareness Program, Museo de las Americas, and LAEF among many others. Anne is married, has two children, and still makes her home in Littleton, Colo., where she grew up.

Mike received his degree in meteorology from the University of Wisconsin, Madison. In 1976, he began work at Weather Central, a private weather consulting firm specializing in forecasts for ski areas, agri-business, power utilities, and the Wisconsin TV network as well as over 40 other radio and TV stations nationwide. Nelson was appointed executive vice president of Weather Central in 1979 and supervised a staff of 14 meteorologists.

In 1985, Mike and his family moved to St. Louis, Missouri where he served as Chief Meteorologist at KMOV-TV until 1991. While in St. Louis, Mike was a member of the American Meteorological Society’s Board of Broadcast Meteorology and was one of six meteorologists that select candidates to receive the AMS Seal of Approval for Television Weathercasting.

Mike has won 14 Emmy awards for Outstanding Weather Anchor. In 2001, he was recognized by the Colorado Broadcasters Association as their “Citizen of the Year” for his volunteer work in Colorado schools. Mike enjoys sharing his knowledge of the weather with young and old, visiting nearly 100 schools, clubs, and service organizations each year. His Tornado Dance is a much anticipated event!