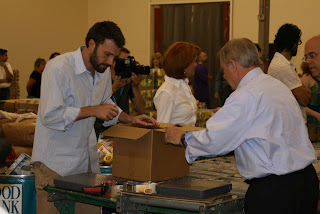 Excitement levels were high around FBR last week. And for good reason. Our parent organization, Feeding America, worked with the powers that be at the Democratic National Convention in organizing an event hosted by FBR that ended up drawing celebrities, politicians and over 70 members of national and local media. The main draw…Mr. Ben Affleck. Not the only draw however! We were also graced with the presence of Vicki Escarra, President of Feeding America, Illinois Senator Dick Durbin, Congressman Jim McGovern and actors Justin Bartha, Alicia Witt and Ben Younger.

Feeding America and FBR staff set up a competition between the celebs and the politicians to see who could complete the highest number of food boxes in an allotted amount of time. The celebs prevailed…it’s up in the air whether or not it was legal for one of the celebs to dump an entire tray of canned goods in each box, but who’s counting. Vicki, Senator Durbin & Ben Affleck spoke of the importance of fighting hunger for our hungry neighbors, the media took countless pictures and videos and we called it a day! A very exciting, action packed day to boot.