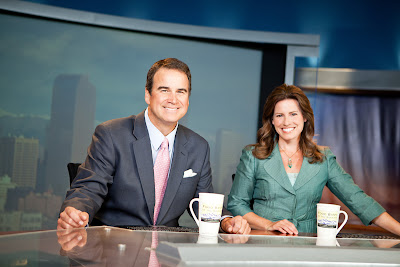 Jim Benemann & Karen Leigh, Anchors on CBS 4
Photo by Hans Rosemond
“In good times and bad, there is big demand on Food Bank of the Rockies to feed hungry people in our community. Without Food Bank and the generous Coloradans who support their vital mission, many people would not be able to provide food for themselves and their families. Their mission of fighting hunger and feeding hope comes down to basic human dignity.  The staff and volunteers at Food Bank of the Rockies serve up dignity and hope with every box of food distributed.”
About Jim:
Emmy-award winning journalist Jim Benemann and Karen Leigh are co-anchors of CBS4 at 5 p.m., 6 p.m. and 10 p.m.  Jim is an outstanding journalist and an exceptional communicator. His passion for his work and his commitment to this community make him one of the most respected broadcasters in Colorado. Jim’s anchoring and reporting background has included major assignments on local, national and international stories.

He established a broadcasting bureau in Washington D.C., where he covered Capitol Hill, political campaigns and sent home reports from Cuba, Korea, South America and Europe. Jim is a Chicago native. He attended Colorado State University, earning a degree in broadcasting in 1978.


His TV news career began in Davenport, Iowa but Jim and his family have always felt at home in Colorado. Prior to returning to CBS4 where he anchored in the early 1990′s, Jim worked at Denver’s KUSA-TV and at KGW-TV in Portland, Ore. In his spare time, Jim likes spending time with his family, golfing and getting into the beautiful Colorado back country.


About Karen:
CBS4 Anchor Karen Leigh is thrilled to be in Denver and at CBS4.  “From the moment I arrived at the airport I noticed something special about the people here,” Karen said. “Everyone looks you in the eye, greets you with a smile and is quick to chat. There’s warmth to the folks here that I’ve been looking for in a community. I already love this place!”


Karen joined the CBS4 News team in 2008 as anchor of CBS4 news at 5pm, 6pm, 6:30pm, and 10pm from WCCO-TV in Minneapolis, Minnesota where she served as an Emmy Award winning morning show anchor since 2004.


Prior to WCCO, Karen worked for two years in her hometown of Little Rock, Arkansas as the 5 and 10pm weekday anchor for KTHV-TV. She spent most of her career reporting in the field from WKRN-TV in Nashville, Tennessee where she won two other Emmys – one for reporting live in the field and the other for a hard news series.


And most recently, Karen added another Emmy to her resume, picking up one locally for anchoring a Beating the Recession special in 2009.  Karen holds a Bachelor of Science degree in communications from Arkansas State University.  Karen says: “Since finding my home in Colorado, my blessings just keep coming. I have not only fallen in the love with the people here, but I met and recently married Colorado native Jim Peros, and together we have an amazing daughter named Elle.”  Karen enjoys spending time at home with her family and doing anything outdoors.  Karen is passionate about family, work and helping the community.