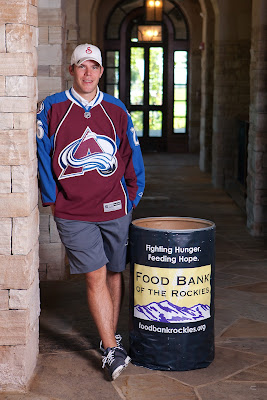 Paul Stastny, Avalanche Center
Photo by Rachel Kemble
“I have lived a life so blessed that I have never worried where my next meal would come from, however many families are not as fortunate. Food bank of the  Rockies strives every day to feed and nourish those in need. I am humbled and honored to be in the company of an organization that does so much for the community that does so much for me.”
About Paul:
Stastny led the Avalanche with a career-high 79 points (20g/59a) in 81 games…His previous high was 78 points as a rookie in 2006-07…Stastny’s 59 assists were also a personal best, nine more than he had during that rookie campaign…Reached the 20-goal mark for the third time in four NHL seasons…Ranked first on the team in games (tied), points, assists, power-play points (9g/16a) and faceoff percentage (50%)…Took 1,703 total faceoffs, second most in the NHL (Sidney Crosby 1791)…Helped the United States capture the silver medal at the 2010 Olympics…Skated in all six games for the Americans, tallying a goal and two assists with a +2 rating while winning 54% of his faceoffs…Played in his 200th NHL game on Oct. 15 at Montreal…Surpassed the 200-career point mark with three assists on Nov. 4 vs. Phoenix…Recorded a seasonhigh four points (1g/3a) on Dec. 2 at Florida…Tied his career-high with a six-game assist streak from Jan. 9-24…Had points in each of his first nine games after returning from the Olympics (5g/11a), his longest point streak of the season…Collected back-to-back multi-goal games for the first time in his career March 11-14…Led the team with 20 points in March (6g/14a), the first Avalanche player with 20 points in a single month since Joe Sakic (20) in February of 2007. PLAYOFFS: Led Colorado in playoff scoring with five points (1g/4a) in six games…Collected two assists and won 14-of-24 faceoffs (58%) in Game 1 of the WCQF at San Jose on April 14…Scored a power-play goal in Game 4 (CQF) vs. San Jose on April 20.
Son of Hockey Hall-of-Famer Peter Stastny…His uncles, Anton and Marian, also played in the NHL…Older brother Yan is currently playing in Europe but has spent time with the Edmonton Oilers and St. Louis Blues…Is involved with Garth Brooks’ “Teammates for Kids.”…Actively participates in the Avalanche Player Clinics, teaching the fundaments of ice hockey to local youth players.