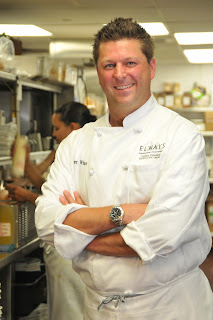 Tyler Wiard, Executive Chef, Elway’s Cherry Creek
“I’m proud to be able to call Colorado home and to put my love for food to work in here in Denver.  When Food Bank of the Rockies asked me to participate in their Celebrity Council, I couldn’t think of a better way to serve this generous community better than working through a hunger relief organization.  The work Food Bank does for those who can’t afford to eat healthy food is outstanding.  I’m excited to join forces with them in finding ways to give back to those who need a helping hand.”
About Tyler:
The road to the ELWAY’S CHERRY CREEK kitchen for Executive Chef Tyler Wiard began in Boulder, Colorado working alongside local chef legends John Platt and David Query on the line at Q’s Restaurant in the Hotel Boulderado. After a stint at Jax-Boulder, another Query restaurant, famed Denver restaurateur Cliff Young recruited Tyler as the opening executive chef of his Napa Café where Tyler’s imaginative, exciting and superbly balanced food drew raves from critics.

Two separate stints as executive chef at Mel’s, the brainchild of wine man and consummate maitre d’ Melvyn Master and his wife Janie, provided Tyler with the chance to experience the culinary world while doing guest chef work at Aqua with Michael Mina, Citronelle with Michel Richard and Wolfgang Puck’s Postrio with David and Stephen Rosenthal. Separated by his 2 years at The Fourth Story, Tyler’s 7 year stretch at Mel’s came during it’s lofty position as Cherry Creek’s hottest spot and Tyler twice scored Top Denver Chef honors from 5280 magazine for his exquisite menus and flawless execution. Two invitations to cook at the James Beard House were amongst the highlights of his Mel’s experience.

While at the helm at Elway’s Tyler has garnered numerous accolades including critical acclaim in nearly all of Denver’s print publications, multiple television appearances and even a feature in Food Network chef’s Paula Deen Magazine. For four consecutive years, Tyler has returned to the “Carnegie Hall for chefs” with Denver’s top chefs to cook at the prestigious James Beard House. Tyler beat out 22 other chefs from across the country to take top prize in the 19th Annual Taste of Elegance, a national competition sponsored by the National Pork Board. A tireless supporter of local charities, Tyler appears in numerous fund-raising events each year on behalf of Elway’s Cherry Creek including the hottest party of the summer, the multi-chef slider competition Hot Rocks Griller Challenge in the Elway’s backyard successfully raising thousands for the mens’ programs of the Denver Health Foundation.

Tyler lives in Denver where he and his wife Jennifer welcomed their daughter Lilliana into the world in February 2011.